In most of the world, the legal age to be an adult is 18 years old. Adulthood is accepting the responsibility for oneself, making independent decisions, and becoming financially independent. At the age of 18 years old citizens can vote and serve in the military. Before the passage of 26th amendment in 1971 many who were drafted for the VietNam war at 18 complained that they couldnt have a vote until they were 21.. “Old Enough to Fight. Old Enough to Vote” became a slogan for change in 1971.  Leading up to that period, the demand had grown that young people be given the opportunity to vote. Even today with social media and decisions being made that affect young people in schools the demand for lowering the voting age to 16 continues.  But voting and drinking alcohol are two separate things.  One can be dangerous. During World War II, President Franklin D. Roosevelt lowered the minimum age for the military draft age to 18, at a time when the minimum voting age (as determined by the individual states) had historically been 21¨. Therefore, people who are 18 or older can make their own decisions. All citizens over 18 have a say in the decisions of the democratic republic.

When did the legal age to drink became 21 years old?

The Twenty-sixth Amendment (Amendment XXVI) to the United States constitution, prohibits the states and the federal government from using age as a reason for denying the right to vote to citizens of the United States who are at least eighteen years old.  It  began in the early 1970s, before passage of the National Minimum Drinking Age Act

During the 1980s and 1990s, legislative changes, increased law enforcement, tougher prosecution and punishment, highly visible advocacy, and public education were all components of the “war on drunk driving.” Other legislative changes, such as mandatory seat belt laws, lower BAC limits, and stricter rules on automobile safety standards can also be credited. The decline in alcohol-related fatalities seen in the United States over the past two and a half decades is attributable to a combination of factors, including but not limited to safer vehicles, increased public awareness of the danger of drunk driving, use of designated drivers—a term that did not exist in the before the drinking age was raised—sobriety checkpoints, zero-tolerance laws for young drivers, and altogether more stringent enforcement of alcohol-impaired driving laws have led to the reduction seen in rates of drunk driving and related deaths. In fact, many of these improvements can be traced to the 39 recommendations presented by the Presidential Commission Against Drunk Driving in 1982. According to an analysis by NHTSA, safety belts and air bags have had a vastly greater effect in preventing fatalities than the 21 year-old drinking age; for example, in 2002 and 2003 alone, more lives on the road were saved by the use of safety belts and airbags than there were in the entire history of the 21 year-old drinking age.

Some people argue that the drinking age should be lowered to 18 as well.  This decision was left to states 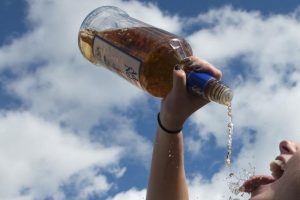 In Some countries the legal age to drink is 18 years old. some people say when a teenager turns to 18 it means they are an adult. but an adult means a lot of responsibility and the ability to act with tolerance. When the drinking age law says “zero tolerance” it is for the safety of others.

Most of teenagers act with zero responsibility when it comes to alcohol. They don’t think the consequences that the alcohol should bring in one point of their life. Also, Adolescents are more likely to be involved in car crashes resulting from drunk driving.

Teenagers get drunk just to have fun. Sometimes teens get involved by the alcohol consumption because their parents drink so in other words they teach them. those parents are careless. Also, teens get involved by their friends, this is the most common way, why a teenagers start to consume alcohol.  The teenage brain is not ready for alcohol consumption and is some cases neither is the adult brain.

One of the many effects on the alcoholic is the fact that they become very irresponsible, not only with respect to the functions for the normal family, but also with employment.
Children with parents who have had problems with drugs and alcohol have a much greater risk of falling into the same lifestyle.
Car accidents.
many people are abused because of alcohol. In other words “RAPE”
brain damage
People innocent died.
problems between families. 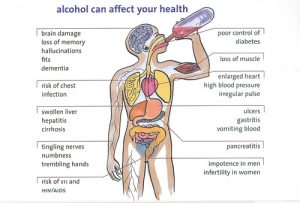 How Alcohol acts in our bodies:

Alcohol can have a double effect on the body, since at the beginning it produces a great feeling of satisfaction and joy, but later it starts to present blurry vision and serious coordination problems. The membranes of the cells can not stop the passage of alcohol, and already being in the blood it is watered by most of the tissues that make up the body. With excessive alcohol consumption, consciousness is easily lost, but if consumption is extremely high it can cause alcohol poisoning and even can cause death.  The law establishes a specific age to be able to buy or consume alcoholic beverages in almost all countries where alcohol consumption has been legalized. This is because the consumption of alcoholic beverages in minors has repercussions on the health and development of the person.