Was it really a win for all in Philadelphia? 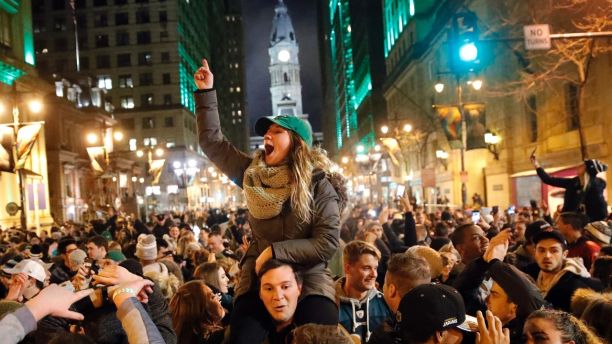 Moments after Tom Brady’s last second hail Mary fell incomplete at U.S Bank Stadium in Minneapolis , Eagles fans in the city of Philadelphia took to the streets celebrating their first win ever . Philadelphia Eagles fan were rioting after they won. They say eagles fan crashed into police officers. All of them were flipping cars and running into stores throwing everything on the streets and throwing food everywhere. Philly fans again saw it as more a challenge than an obstacle, and there were people dangerously hanging off poles.

A man in Philly who distributed tickets said ” it’s like you been a loser your whole life and after they won suddenly you’re not a loser anymore.” I think just because you finally win a game doesn’t give you a reason to destroy the whole town! It’s a matter of time before you have to go back to reality. The day after you wake up from the super bowl, you wake up to a trashy town. I wouldn’t want to live surrounded by trash.

There were many people who were acting obnoxious and were destroying owners property! “Police also released photos of two men who allegedly used a metal pole to break a window an A.C Moore Arts and Crafts store on South Broad Street around 12:30am. In that particular incident, police said the store sustained about $4,000 worth of property damage.”  For this guy right here; he would have to pay property damage, courts fees and even fines. Is this all worth it for just a game?

Lack of Emotional Control and Metacognition

It’s great that the eagles won. You are celebrating for something that you want to be respected for , but why give people a reason to not respect you. This is lack of emotional control. I just think why ruin something good with doing bad?