What Does it Take to be Commander In Chief? 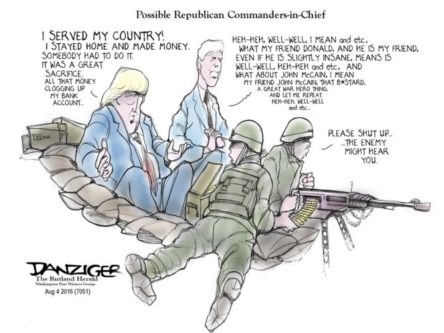 Commander in Chief is one of the titles given to the US President to indicate that he or she is the supreme commander of the United States Military.  George Washington was chosen with overwhelming majority vote to be our first President because of his military leadership skills.  In the 2016 Presidential election Democrat Hillary Clinton is criticized for her lack of integrity and her endangerment of American forces as Secretary of State while Donald Trump has absolutely no experience and is viewed by many as being emotionally reactive and trigger happy if he were to be the military head.  Often it is the confidence that the American voter has in the President as military leader that makes or breaks a candidates election success.

The 1988 attack ad against the Democrat Michael Dukakis was informative and effective because  it stacked the deck against him as a military leader.   It told us a lot of what Dukakis did not like and what he opposed in regards to supporting the military.  Vice President George Bush was riding on the coattails of 8 years of military spending under President Ronald Reagan.  It is  natural that democrats may be against too much spending.  This ad told us the truth about what Dukakis wanted but they made it sound much worse and portrayed Dukakis as a military fake.   It is highly likely that Michael Dukakis really wanted to build a strong defense for our country and make everyone feel safe but the ad made viewers believe he was a hypocrite.

In 1988 the Cold War was coming to an end and Ronald Reagan was getting the credit.  Bush rode the coattails of Reagan’s military success and pointed to Dukakis with “guilt by association” as voting against that success.  In reality Bush brought up something that did not matter as much  in this election.  What did matter was housing, health care, jobs, and education for children. Dukakis was portrayed as being soft, indecisive and hypocritical; these are not good qualities to take on the commander and chief role.

In this 2016 election, Hillary Clinton has also released attack ads questioning the ability of Trump to be the next Commander in Chief.  In one ad they state that Donald Trump has been talking about the option of using a nuclear weapon on our western European allies. Donald Trump does not have the right temperament; in many ways he would be too harsh and lead us to war.  In this Ad Micheal Hayden,  Gillin Turner,  Max Boot, and Charles Krauthammer all give their opinion on how they feel if Trump governs and how they would be frightened on the choices he would make as they feel like he shouldn’t  be given the nuclear codes.  Below, Trump is shown as not having the emotional control necessary to be in full charge of our military around the world.

On the other hand Donald trump got a retired US Marine who served during the attack on the American embassy in libya to endorse him. The marine says a lot of people don’t want to vote anymore because their candidates did not win. During one of the takes the marine said that he knows other people that cant vote and then the camera showed the graves of soldiers who died fighting for their country. The Marine believed Hillary could have done more during the incident but she didn’t and as a result  4 American soldiers died. At the end of the ad the Marine said he served  his country and so did his friends but they didn’t make it, they did their part. Now is time to do ours. Through the propaganda technique of endorsement and testimonial he is trying to imply that you should not vote for Clinton because she did not send help when it was needed. His point is that Donald Trump would be a better leader for our country and especially for our military.