Who Can We Trust Now? Salvadorans look to solve problems on their own. 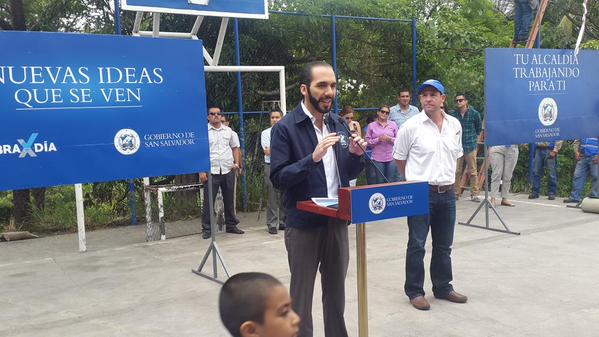 There have been times when the United States and El Salvador had a good relationship. The United States helped El Salvador by helping with the economy and El Salvador could trust the United States. Now that Trump is in the Presidency things may change.  Latin America is losing trust in the government of the USA.  The President talks about walls not bridges.  He does not care about helping El Salvador economically.  If we both want to be more powerful and more peaceful then we need to work together to achieve what we want.
The link below outlines issues between the two candidates for the 2016 US Presidential election.  Now that we have President Trump instead of President Clinton things will be worse for Latin America.
http://www.insightcrime.org/news-analysis/how-us-elections-could-impact-latam-security-organized-crime

Through the years it seems that the population of El Salvador is making bad decisions in choosing the Government. The increasing of violence in El Salvador is higher each year. But what does the Government of El Salvador do to stop violence? Until today it seems they are not doing anything. Many of the people who immigrate to the U.S.A.  do so because there are not jobs, or they don’t  have enough  education to fit in a job that they can earn enough to feed their family.

But in 2015, for the population of San Salvador something change because a distinguish man won the elections, this man seems different from the others because is a man who is trying to defend his people, and he care more for what is happening in the country more than no one before.
Nayib Bukele is the mayor of San Salvador, the capital of El Salvador. He won the position in 2015 on the official party ticket, the Farabundo Martí National Liberation Front (FMLN), after being mayor of Nueva San Salvador, a small town on the outskirts of the capital
When Nayib took office as mayor of San Salvador he said “Todo se puede cuando nadie roba” (everything can be possible when nobody steals). What he means is that if each person who works for the government does their job people do not need to leave their country, because they have everything they need in their country. Nayib about four years ago was the mayor of Nuevo Cuscatlan a town that before he enter as mayor it seem like it does not exist at all,  but now that he work hard to change this town it is one of the best town in the country and the people there are happy with what he had done. The population of Nuevo Cuscatlan comments that they have everything over there that they does not need to go to another place because they have what they need in their town. Bukele make a lot of job opportunities for the people there and he give scholarships to the students who have good grades he said that the scholarships will be paid everything but with that they have at least a C+. Nayib does not have a salary in this position, so the money that is for him he gave it to the students as a scholarship.

Now that Nayib is the mayor of the capitol of the country he said it is not going to be easy but I can do it. He start his job as a major by doing “Una Obra Por Dia” this is a project that Nayib made to do each different thing everyday.  Since he is the mayor he have done a lot of things that no one in the past has done. In San Salvador no one took the risk to do the new shopping center to the people. This was one of the biggest project that no one before wanted to do because it was a lot of money and the reason why Nayib made it true was because in the old shopping center the gangs were the ones who owns it.

Also, Nayib is trying to build public libraries because he believes that education is first and he wants every kid to attempt school and in a future to have a better life. He thinks that this helps kids to avoid gangs, Nayib is doing small group of student that can help the elders to learn how to write and read.

A lot of people are happy with Nayib because he knows what he wants and he is not like the mayors that were before him. Till today he is doing what he promise to the population of San Salvador during his campaign in 2015. Many people who knows Nayib want him as the new president of El Salvador but with the only condition of creates his own political party because they are tired of the lies that both FMLN and ARENA has told them.