Why do people consume Ayahuasca? 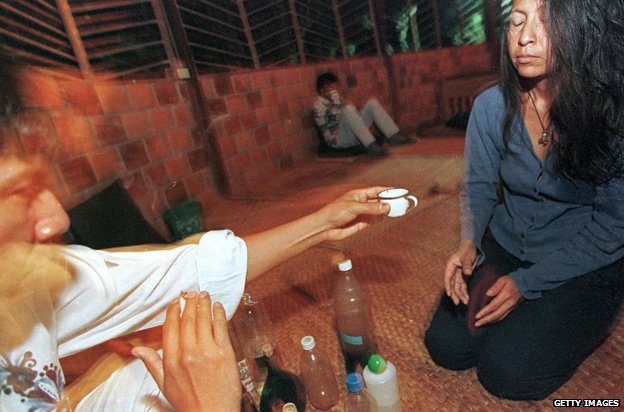 Ayahuasca also known as the “teacher plant” is a mix of two plants, the ayahuasca vine and a shrub called chacruna which conatain the drug dimethyltryptamine (DMT) and is made to drink. Ayahuasca is legal in Peru as part of a spiritual ceremony conducted by shamans.

Although DMT and therefore ayahuasca  are illegal in the UK, United Sates and many other countries in South America it is a key component to some tribal societies. In 2008 Peru  recognized Ayahuasca’s status , stating it was  “one of the basic pillars of the identity of the amazon peoples”. The government also claims the the consumption of Ayahuasca  “constitutes the gateway to the spiritual world and its secrets, which is why traditional Amazon  medicine has been structured around the ‘teacher plant'”.

Ayahuasca tourism is well established now in South America. Advocates have said it has become increasingly popular as a tool to treat PTSD, depression, and addictions. This ritualistic learning process is becoming popular across the globe as people are exploring their personal development through introspective nature of the whole experience.

I was very interested in this experience and the fact that it was used as a tool to treat PTSD, depression, and addiction. I thought it was cool that through this experience one can possibly come out with a whole new mindset and that people were so dedicated to be rid of their problems they would travel all the way to Peru. This drink is definitely not considered a recreational drug and is to be conducted under supervision of experienced guides like the shamans. I would like to see more research done on Ayahuasca for further understanding of it.

How one plant in Latin America can be deadly

Why do people take ayahuasca?

The Dark Side of Ayahuasca