Why the U.S. entered World War I 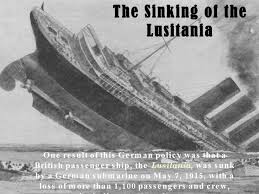 World War I was the war between the Allies and the Central Powers (1914-1918). The Central Powers were formed by Germany; Austria- Hungary, Italy who later switched side and Ottoman Empire and the Allies were formed by Russia, France, Great Britain, Italy and the United States. It was a war with many casualties but the purpose for fighting still remains uncertain. The United States joined the war in 1917. They decided to join the war for three reasons.

The first reason was when a German Submarine sank Great Britain`s ship called the Lusitania in 1915. In this ship there was 128 Americans. Germany shot down the Lusitania because it got too close to the restrictive area of Germany and they also thought that Britain had weapons in the ship, which was true
The second reason was because Germany sent Mexico a Telegram where they asked Mexico to invade the United States and as a reward they would help them to get back the land that the United States took from them, but the U.S.A intersected that Telegram.
Then the third reason was when German Submarines shot down three American ships because of the same reason that they got too close to their restrictive area, so that was the spark that made the United Stated to join the war.  President Wilson declared that we needed to “make the world safe for democracy”.

I agree with American`s decision to join World War 1. First of all the Germans killed 128 American citizens and then tried to make war by asking Mexico to attack the U.S. and finally it would not let America trade freely overseas.  The Germans killed innocent people who were aboard the ship, so the U.S. did the right thing by joining the war and trying to defeat Germany for what they did to them. Do you think there are good reasons for Americans to go to war? 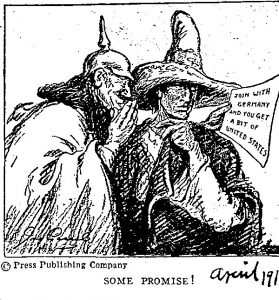