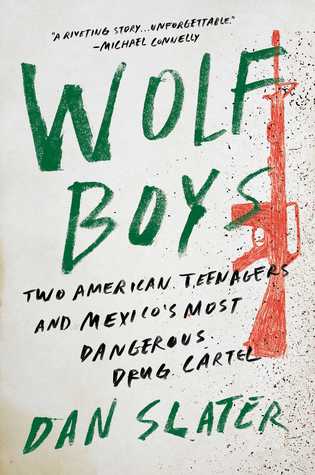 The Wolf Boys, is the book written by Dan Slater. He wrote about two assassins Gabriel Cardona and Rosalio Reta. They were two teenagers that were part of the drug cartel known as the Zetas. Gabriel Cardona started on simple gangs groups. then he started to smuggle truck from Laredo, Texas to Nuevo Laredo, Mexico. Until he went to the Drug Mexican Cartel and joined as an assassin.

Reta joined this Cartel when he was 13 years old. On one night he traveled to a ranch and meet Miguel Trevino known as the Z-40. The leader of the zetas taught them how to kill on cold blood. both have done multiples assassinations. Cardona was his young friend and one day in 2006 the police caught Gabriel Cardona on Laredo, Texas. Reta turned himself some time later. Cartels do horrible things with the trafficking with Colombian cocaine. Below this video shows the two men being interviewed. Young people can be manipulated by money and power and fake authority.  They are victims of the violence and abuse.  The young victim becomes the abuser.  That is how gang life works and until we can reach out to these vulnerable young people this cycle will continue.

Mr. Reta was 13 when he was recruited by the Zetas, the infamous assassins of the Gulf Cartel, law enforcement officials say. He was one of a group of American teenagers from the impoverished streets of Laredo who was lured into the drug wars across the Rio Grande in Mexico with promises of high pay, fancy cars and sexy women.

After a short apprenticeship, the young men lived in an expensive house in Texas, available to kill whenever called on. The Gulf Cartel was engaged in a turf war with the Sinaloa Cartel over the Interstate 35 corridor, the north-south highway that connects Laredo to Dallas and beyond, and is, according to law enforcement officials, one of the most important arteries for drug smuggling in the Americas.

The young men all paid a heavy price. Jesus Gonzalez III was beaten and knifed to death in a Mexican jail at 23. Mr. Reta, now 19, and his boyhood friend, Gabriel Cardona, 22, are serving what amounts to life sentences in prisons in the United States.

In the book  I read the difference between the book and real life. The way Reta and Gabriel Cardona met Miguel Trevino. In real life Reta met Trevino going to a ranch out of the city. That was the first time that Reta saw people being tortured and decapitated.

In the book here is the quote.

“Beyond the open door was a circular driveway and what appeared to be a large ranch. With a bunch of small houses on it. They were left over more suburbans arrived. From the shadow plodded a phalanx of men led by an individual wearing a gun holstered on one thigh, a knife on the other: Miguel Trevino.” -Chapter 9

Young people need community, hopeful goals, and education to avoid the lure of dangerous meetings such as the one described above.  There is hope but we need to invest more heavily in these types of solutions that treat the whole human problem rather than build walls of fear or punishment.

The Gang Resistance Education and Training (G.R.E.A.T.) program is a school-based gang prevention strategy that was originally designed by the U.S. Bureau of Alcohol, Tobacco, & Firearms (ATF) in 1992. Some critics argued that the original design of the program was based off a failed model, was not “gang specific” and instead targeted general delinquency, and was aimed at students with relatively low levels of gang involvement.11 As a result, the ATF along with educators and prevention specialists redesigned the program in the early 2000s. The new design recognized the body of research on risk factors and their associations with gang membership and the extent to which school-based programs are capable of and effective at addressing particular risk factors in the school, peer, and individual domains.29 The program’s goals remained: to teach youth to avoid gangs, to prevent violence and criminal activity, and to assist in the development of positive attitudes toward law enforcement. Trump’s unilateral offer — coming alongside demands that Mexico pay for a border wall to stop illegal migration, a wave of deportations, and a threat to terminate the North American Free Trade Agreement—has revived memories of U.S. gunboat diplomacy and prompted “Gringo go home” sentiments south of the border. In any case, most knowledgeable observers agree that a military response to the cartels will backfire.   http://www.miamiherald.com/opinion/editorials/article140482313.html

As Americans we need to see an investment in one another and especially along the borders.  We need to see more public funding in programs like these two from LA and the DC metro area that are sponsored by the Catholic church.