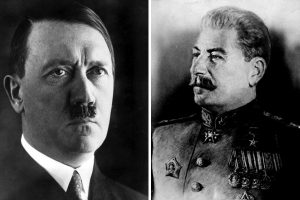 World War 2 was fought from 1939 to 1945. It affected the entire world and involved more countries than any other war. It introduced powerful new weapons and the first use of a nuclear weapon.

The war in Europe began on September 1st 1939 with the invasion of Poland by Germany. Germany began its most ambitious action by invading the Soviet Union. The leader of the Soviet Union at the time was Joseph Stalin, and the leader of Germany was Hitler. They had signed a Hitler-Stalin pact that said they would remain allies. Stalin had trusted the pact but it turned out that Hitler broke it and decided to try and invade Russia in 1941. The Soviet Union was way too big and their nations strength and determination along with their brutal winters would be more than Germany could overcome. The battle of Stalingrad is considered a turning point because it bled the German army dry in Russia and after this defeat, the German Army was in full retreat. The war ravaged civilians more severely than any previous conflict because of the amount of people that were involved and affected.

Fighting continued throughout the Pacific, and allied forces were bombing Japan’s major cities. The atomic bomb was first used by the U.S. in war on the Japanese cities of Hiroshima and Nagasaki, resulting in mass destruction. The use of the bomb was approved by President Harry S. Truman. It’s been understood that he decided to drop that atomic bomb because it prevented the need for an American invasion of Japan and brought a quick end to the war. Japan would be forced to surrender.

Many say that Truman saved more lives that could’ve been lost but no one would ever know. He decided to protect his country and he did so. On September 2, 1945 the official surrender of Japan Aboard the USS Missouri in Tokyo Bay, brought an end to World War II. The Japanese navy and air force were destroyed and the Americans occupied Japan.

In Europe some results of the war were the soviets having control over Eastern Europe. The allies divided Germany East and West. Stalin preferred that Germany divide in two so that it could not rise to it’s former strength to threaten European peace and  security again.Stalin was a communist dictator while England, France, and the U.S were democratic free markets.

This triggered the Cold War because the U.S. and Russia had different political and economic views. The east west tension of the cold war caused the formation of the NATO alliance and the soviet Warsaw Pact. Western Europe was rebuilt with the U.S. Marshall Plan in 1947, the United Nations would be formed to solve political disputes between countries and prevent unnecessary warfare.