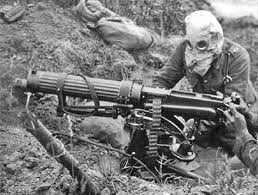 New technology made warfare more terrifying and horrible than ever before in the early 20th century . During The Great War  (World War I), millions of soldiers lost their lives due to new industrial weapons. Technological developments in engineering, metallurgy, chemistry, and optics had produced weapons deadlier than anything known. Both sides used a variety of big guns on the western front, ranging from huge naval guns mounted on railroad cars to short-range trench mortars.

One of the most significant technological advancement during World War I was the improvement of the machine gun, a weapon originally developed by an American, Hiram Maxim. The weapon’s full potential was demonstrated on the Somme battlefield in July 1916 when German machine guns killed or wounded almost 60,000 British soldiers in only one day.

Modern war technology had changed the course of civilization. Millions had been killed, gassed, maimed, or starved. Weapons such as chemical gasses had effects on soldiers and civilians alike because of their environmental impact.  Because of rapid technological advances in every area, the nature of warfare had changed forever, affecting soldiers, airmen, sailors, and civilians alike.

Summary of American Involvement in World War I

The American people were shocked that the European nations were actually at war. Since 1898, the United States had acted as a major power by intervening in the Caribean and asserting an open door policy in China. Yet it strongly held it believed in Washington and Jefferson of not allying the nation with any European power or becoming involved in any war accross the Atlantic ocean.
The first major crisis challenging U.S neutrality and peace was the German torpedoing of a British passenger liner, the Lusitania, on May 7, 1915. This incident killed 128 Americans. In August 1915, two more Americans lost their lives at sea as the result of a German submarine attack on the Arabic.
After the Lusitania crisis, a small but vocal minority of influential republicans from the East including Theodorev Roosevelt argued for U.S entry into the war against Germany.
Many Americans especially in the Midwest and West were opposed to war preparedness. Anti war activists included Populists, Progressives, and Socialists.

In April1917 president Wilson went before Congress to ask for a declaration of war against Germany. The U.S. Government used techinque of both patriotic persuasion and legal intimidation to ensure public support for the war effort.

In the spring of 1918 U.S. troops held the line against the last ferocious assault by German forces at the Chateau-Thierry on the Marne River. In August, September, and October, an allied offensive along the Meuse River and through the Argonne Forest succeeded in driving an exhausted German army backward toward the German border.
The Treaty of Versailles 1919, officially ended the war.
President Wilson had strong pro-British sympathies, his policies favored British throughout the period of neutrality, and the interest of U.S. bankers and arms manufactures in making war profits were ultimately behind Wilson’s decision for war. Once the War ended the President did not have the support of the American people and Congress failed to act in joining Wilson’s proposed League of Nations.

Do you think the U.S. has changed its isolationist attitude in the last century?  What lessons did we learn from world war?