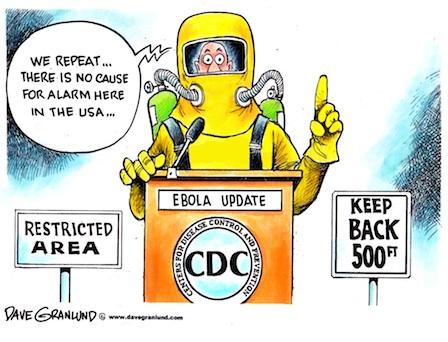 This article from the British newspaper, The Daily Mail, posted today talks about the nation’s ongoing plague, also known as Ebola. The deadly virus was recently transferred to a female prisoner from Virginia. She recently traveled from West Africa and is the first female prisoner to be quarantined for having symptoms of Ebola. She is currently being held at  Inova Loudon Hospital in Leesburg Virginia. She is just one of several people being quarantined under suspicion of having Ebola. Officials are saying that there’s a very low probability she has the virus.

I believe that the government is filled with extremely uneducated individuals. The only hope is to put trust in God. The government knows how to prevent this disease from spreading, they know it deep down inside their very cores. Yet they hesitate. Why is that?

This has to do with the core democratic values of truth and life. I also strongly believe that the lives of the people of America are in the hands of God. Many people are going to lose their lives and many people are going to suffer. All because of the Government. Evil is amongst us and we must put our faith in God. The truth will always prevail. Under all oppression. Over any virus, storm, or quake. Like a rushing wind truth will dominate.