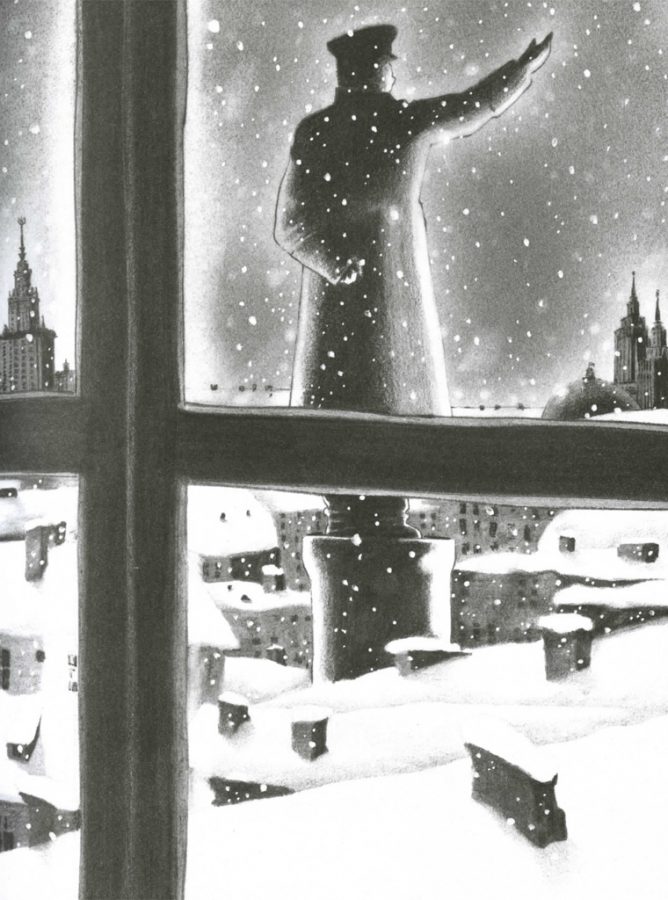 Stalin was the communist dictator of the Soviet Union from 1923-1953.  This book describes 2 days in the life of a small boy who loves his father.   During the morning, he believed the communist party was the best party in the world.  He describes the propaganda of this party as it is represented in the blood color or red color of people fighting for freedom. .Russian people don’t understand the American people and they are told that the Soviet Union is the best country in the world.  But you don’t have the right to choose in the communist party and you are not innocent until proven guilty.

By the night of the second day everything has changed for this boy Sasha because his father; who was once a loyal agent of state security was arrested by the communist party.  This event for Sasha is so hard to accept. The party propaganda was given to Sasha at school and he accepted it because he loves his father. He wants to be a good pioneer in the future and hopefully meet “comrade Stalin” one day.

After this event happens Sasha’s life completely changed. Sasha’s neighbor Stukachov has a family of 6 and wants the bigger room that is occupied by only Sasha and his father.  Stukachov reports Sasha’s father as a suspicious “enemy of the people”. This is all it takes to have people arrested. It might be that the state already did not trust the father because he was married to an American woman.   He may have already been in trouble just for this because Communists did not trust any foreigners, especially American Capitalists.

During the second day Sasha returns to school after his father was arrested the night before.  An event happens that totally changes everything for Sasha. He broke a statue of Stalin by accident and felt pressured to cover it up just as his teacher Nina Petrovna was explaining to the class that the young communist pioneer’s duty is to collectively expose those responsible for what happened  to comrade Stalin’s statue.Then and only then will we be allowed to proceed with the pioneers rally. Act in the Stalinist spirit and you will earn the the red pioneers scarf tied around your neck.’’ everyone is quiet. Nina Petrovna scans the classroom..

‘’ Now take out your pencils,’’ she says ‘’On a new sheet paper, write down the names of the pupils in our class whom you suspect might be responsible.  When finished, sign and date your list in the upper right corner and pass it to the front.’’ This example of Communist “justice” is unbalanced when you compare it to the United States and the 6th Amendment which says :

“In all criminal prosecutions, the accused shall enjoy the right to a… trial, by an impartial jury of the State and district wherein the crime shall have been committed, which district shall have been previously ascertained by law.”

What the 6th amendment says is the opposite of what was happening in Nina Petrovna’s classroom and Stainist Russia.  This is shown in the following description from Chapter 13.

Nina petrovna, our classroom teacher she always seats the best pupils up front vovka sobakin used to sit in my place,but now he’s in the back, in kolyma,with all the bad ones.We Call the  back row kolyma because kolyma is a faraway region in our country where Stalin sends those who don’t deserve to live and work among the honest people her class room no freedom. I Have an important announcement,children’,says Nina petrovna.Thecommunist hero, the eagle eyes of our beloved state security,and the father of your classmate,our dear comrade zaichik,will be attending the pioneers rally today and will personally tip the scarves on all of our new pioneers. 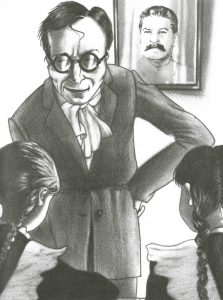 On page 49,  Borka is a target because he is a Jewish boy and his parents were arrested sometimes before effectively orphaning him. Burke’s parents got arrested and he is the only Jewish child in his class so he is bullied by both the teacher and  the classmates.
What is the 6 th Amendment?
Rights of Accused in Criminal Prosecutions: Rights to a Jury Trial, to Confront Opposing Witnesses and to Counsel.

In U.S always people have respect all people this the best thing you do wrong thing first the police officer need to really evidence but in USSR policies Stalinist  don’t waste time to find the evidence he say guilty you are guilty no choose.

“Presumption of innocence” serves to emphasize that the prosecution has the obligation to prove each element of the offense beyond a reasonable doubt (or some other level of proof depending on the criminal justice system) and that the accused bears no burden of proof.

USA: 6th Amendment
USSR under Stalin: from the book

Public trial where the accused shall enjoy the right to a speedy and public trial,by an impartial, jury of the state and district wherein the crime shall have been previously ascertained.
Public Accusation chapter 13 and 18 the teacher was out evidence or justification she says you are guilty support communist.  for example”now take out your pencils’,she says’ A stellar example of another individual who will not be permitted to join the pioneers’.

Impartial Jury The person convicted of a crime has the seedy trial with a fair judgement of evidence.
“Write down the names …raise your hand.”

Right to a lawyer and innocent until proven guilty.
No trial     sometimes you were saved by turning in someone else.   Example Sobakin

As you can see, state he don’t have any idea to  Amendment 6th he thinks communism party the best party in the world I wonder what it’s like in the capitalist countries.I wonder ‘t be surprised if children there had never event tasted a carrot but  state think wrong because communism party not say you have the right to choose or right to vote capitalist carrot more sweet than communism party .Hopefully, the writer who wrote the book called the Braking Staline might come to this country  to compare his right with U.S.A .