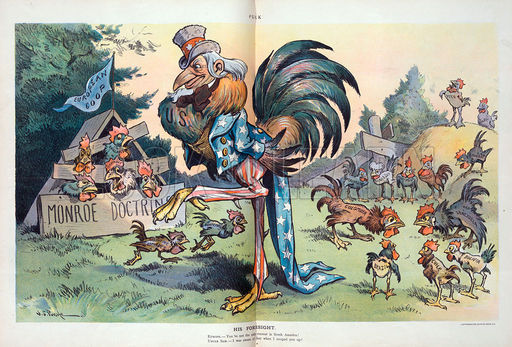 The big Rooster is of the United State and the smallest roosters are of the Centro America.

Honduras gained independence from Spain in 1821  and was a part of the First Mexican Empire until 1823, when it became part of the United Provinces of Central America. It has been an independent republic and has held regular elections since 1838.

The Monroe doctrine was a United State policy of opposing European colonialism in the Americas beginning in 1823. It stated that further efforts by European nations to take control of any independent state in North or South America would be viewed as “the manifestation of an unfriendly disposition toward the United.

The United States has been like a big brother in the North for central American countries like Honduras.

This video show that a lot person they were happy when the independent came to Honduras because they help and gave job to a lot person and could have more better life and Honduras could be a better country.