Do Sex Offenders Have a Right to Sue?

Nine men who were convicted of sex crimes, served their prison sentences and now are confined in Iowa’s mental health unit. These nine men have filed a federal lawsuit, claiming that the Iowa civil commitment program is unconstitutional because it fails to offer adequate counseling and other services that rehabilitate them enough for release. This lawsuit was filed in September 2012. The state had a difficult conflict finding balance between keeping dangerous sexual predators off the street and not violating their constitutional rights by imprisoning them longer than their mandated sentences. These men said that Iowa’s sexual offender program was ineffective and therefore unfair.
More than 5,000 people are believed to be civilly committed in such programs in 20 states and by the federal Bureau of Prisons. In the last year, federal judges in Minnesota and Missouri have ordered changes to those states’ programs after finding them unconstitutional due to inadequate rehabilitation and proper assessment of risk of reoffending.

In Iowa, U.S. District Judge Mark Bennett rejected the state’s motion to dismiss the lawsuit in March, using “Hotel California” lyrics in his 50-page ruling to describe Iowa’s Civil Commitment Unit for Sexual Offenders program: “You can check-out any time you like, But you can never leave!”

http://www.mprnews.org/story/2016/09/22/sex-offenders-sue-over-iowa-civil-commitment-program
The assistant of Iowa’s attorney general argued in court documents that the program did not offer due process, noting that some of the plaintiffs have been released from the program. In Minnesota a special judicial panel recently ordered the first “unconstitutional” release of sexual offenders in a similar program.

A sex offender is legally defined as any person convicted of a sexually related crime and they are required to be publicly registered for the protection and awareness of the community.  The department of Justice has this site available:https://www.nsopw.gov/?AspxAutoDetectCookieSupport=1

This type of crime is offensive and often hard to comprehend.  As a young woman its hard to imagine any type of lenient justice for a rapist.  These type of criminals should be held in prison for quite a while. These types of criminals have given up their constitutional rights in these extreme situations.  On the one hand this country protects all rights; even the rights of the accused but on the other hand I don’t want these people out on the streets near our homes and stalking our communities.  Often this type of behavior is associated with addiction and in need of treatment but someone who commits these sex crimes should not have a right to be a civil citizen.  They’ve already committed a wrong and they are likely to do it again. I don’t believe in second chances when it comes to sex crime because of the potential harm that this causes the victims.  It may be harsh but it is my opinion.

If you have any suspicions or noticed any oddly behavior from someone whom you might think will put danger to community report to your nearest police department. http://www.fairfaxcounty.gov/police/reportcrime/ 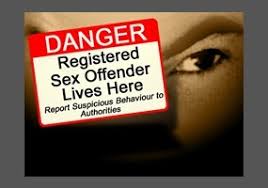