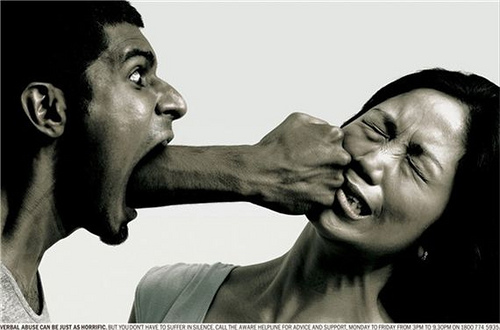 About 1.5 million high school students are abused by their partners each year. One in 10 high school students has been purposefully hit, slapped, or physically hurt by a boyfriend or girlfriend.  Many young adults are going through an abusive relationship and they don’t know how to get out of the situation. Some of them feel that the partner that is abusing them loves them and cares for them. Victims may think it’s their fault. They may think they made their partner upset about something they did.  The abuser often attempts to make the victim feel guilty and the victim often says sorry or finds away to make their partner happy again. Some abusers often show signs such as they become over protective, jealous, other emotional changes.  Some threaten to hurt themselves if you say you will leave.  Some start checking your cell phone and social network accounts.

When the victim starts to notice any of these signs they should immediately leave the relationship.

Men are not the only ones who abuse. Women can abuse too. It’s more common for men to be the abusers.

There are many kinds of abuse such as emotional, physical, and sexual.  None of these are okay. If someone is making you feel bad about yourself because you won’t do what they want,  that person doesn’t love you.   It doesn’t matter how many times they say they are sorry or that they are going to change, get out of the relationship the first chance you get.

These are examples of an unhealthy relationship.